History of Spiral Wound in CA

Spiral Wound lining is a trenchless technology that uses continuous strips of PVC to fully restore gravity pipelines from 6” to over 200” in diameter. This unique rehabilitation method first originated in Australia and Japan during the 1980s. Now, with four decades of installation history, Spiral Wound has been used to structurally rehabilitate millions of feet of pipe in the United States and across the globe.

Spiral Wound liners were first introduced into the United States market in the 1990’s. In California alone, over three million feet of liner has been installed to date and growing. Most of the projects in California required SEKISUI’s SPR™EX Liners, a tight-fitting liner solution to renew gravity pipelines between 6” – 42”.

Spiral Wound lining has a long and successful installation history in California due to its many features and benefits. First, the inherent, environmental features of the Spiral Wound method, which involves no heat or chemicals for pipe renewal, is an attractive feature to a state like California. As environmental requirements continue to change across the country regarding construction materials and practices, the chemical free nature of Spiral Wound more than meets these standards for other regions in the U.S. While California has been an early adopter of some of these practices, Spiral Wound is becoming a popular, eco-friendly choice to renew pipelines across the United States.

Second, Spiral Wound liners can typically be installed in live flow conditions without the need for by-passing, which is not only a huge cost savings, but it minimizes the overall construction footprint and installation times. Additionally, Spiral Wound liners have passed rigorous physical property testing, such as the infamous “Pickle Jar” test, an accelerated aging test which verifies that a liner can meet a minimum 50-year design life. Spiral Wound liners were first included in the 1998 Edition of “Standard Specifications for Public Works Construction” “Green Book” per section 500 Pipeline Systems Rehabilitation. Many agencies in California such as the City of San Diego require that products or materials used in a sanitary sewer environment must be able to meet the requirements of this testing protocol.

SEKISUI Spiral Wound liners have been utilized by agencies throughout California. These include Los Angeles County Department of Public Works (LACDPW), the City of San Diego, and the California Department of Transportation (Caltrans) to name a few.  Some key projects are as follows:

LACDPW – Over the years, SEKISUI’s licensed contractors have worked on numerous projects for LACDPW. The first sewer rehabilitation projects such as Kern Ave, Ford, and Poplar in 2001 focused on the older concrete sewers which were located in East Los Angeles County. These sewers were a top priority due the age and poor condition particularly due to extensive H2S corrosion. In recent years, LACDPW projects such as Bellflower Projects 1 and 2 as well a Sewer Lining Projects 8 -13 (2012 to present), have focused on the county’s vitrified clay pipe (VCP) sewers. Typical VCP defects have included circumferential and longitudinal cracking and offsets, especially in areas of high seismic activity and earth movement. Due to these challenging site conditions, all county projects require the proposed rehabilitation to be a structural standalone liner for fully deteriorated pipe conditions. To date, over 750,000 feet of SPR™EX liners have been installed on county sewer rehabilitation projects.

City of San Diego – The City of San Diego approved Spiral Wound liners for their sewer rehabilitation program in 2000. This was part of an overall program to reduce sanitary sewer overflows to comply with their consent decree agreement with the U.S. EPA. Two decades later, over 1 million feet of SPR™EX liners have been installed in the city with several projects currently under construction. Though the mandatory repairs as outlined in the EPA Consent Decree were completed in 2015, the city continues a robust rehabilitation schedule. The current CIP program is funded through 2024 with an annual goal of 40 to 45 miles of sewer to be replaced or rehabilitated per year. With the cost savings associated with trenchless technologies, the focus is to use structural liners where possible.

Caltrans District 8 – This culvert rehabilitation project was in the San Bernardino Mountains. Difficult access was a challenge due to the culvert’s location off the shoulder of winding Route 330. In the end, over 1,800 LF of 24”-30” CMP was restored by SPR™EX in 2018. The CMP culverts to be rehabilitated were located within or near the habitats of regulated species including the Southern Rubber Boa and several nesting and migratory birds. A biologist was on site during the entire installation process and was responsible to guarantee contractor compliance with the laws and regulations protecting said species. Additional measures would then be implemented to further protect the habitats. Since SPR™EX is a mechanical, environmentally friendly solution, the rehabilitation process posed no chemical contamination threat to the sensitive area.

Back Bay Storm Drain Rehabilitation – This SPR™EX project took place in Newport Beach, CA where the culvert rehabilitation work occurred within an ecological reserve. Due to the environmentally sensitive location, SPR™EX was chosen to renew over 1,000 LF of culverts ranging from 12”-24”. The work commenced in 2014 where over 20 culverts were successfully renewed in highly sensitive work areas. The biggest construction challenges involved addressing the tidal flows. The excess flows were diverted to maintain workable flow levels, but the installation process continued under live flow. Despite construction challenges and unusual rain events in December and January, the project finished on schedule and under budget.

Orange County Sanitation District – More recently in 2020, Spiral Wound liners were specified by OCSD for a project located in Placentia, CA. The project was located underneath the Tustin- Orangethorpe overpass. The downstream manhole was located off the curb then continued for 250 feet running parallel to the overpass, then under the Burlington Northern – Santa Fe Railroad tracks and ROW, then terminating in an access structure located on the other side of the railroad tracks. Though these site conditions would present a challenge to most trenchless rehabilitation systems, this was an ideal application for SEKISUI’s SPR™EX PVC Spiral Wound liners. Due to the pipe location and rail tracks, flow by passing could not be done. This meant the contractor had to install the liner in live flow conditions. Furthermore, the SPR™EX liner for this project had to be designed to withstand Cooper E-80 loading.

Spiral Wound liners, and specifically SPR™EX, have a rich history in California that spans for over 2 decades, and this trend looks to continue. Spiral Wound liners are being evaluated and approved not only by agencies in California, but throughout the United States due to their unique features and benefits.

As awareness of Spiral Wound has grown, so too has the opportunity for the full spectrum of Spiral Wound products to provide solutions. SPR™ (32” – 200”+ applications) which has a strong presence in Georgia and the east coast U.S. is becoming a popular option for larger diameters and/or non-round shapes in California. SPR™TF (40” – 60”), a new Spiral Wound technology introduced to the U.S. in 2018, is now available to provide tight-fitting (no grout) lining for gravity applications between 40” – 60”. SEKISUI’s Spiral Wound liners have provided trenchless renewal solutions within California for over 2 decades and will continue to repair the state’s underground infrastructure for years to come. 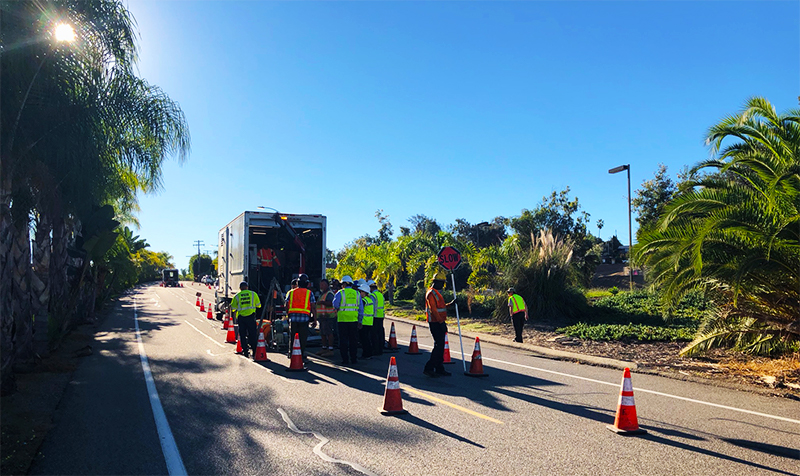